Tonight (October 3rd), Lakeshore Baptist Church hosted a public safety debate for all of the Oakland November 2012 Candidates. Due to the timing and the format they were only able to ask two questions; the candidates position on gang injunctions/curfews and a general statement about their public safety platform.

I and (a lot of Oaklanders) however have different questions that have to do with some recent developments concerning Oakland City Council and public safety. Since we were not able to ask questions during the public safety forum, I am asking them here now. (below) 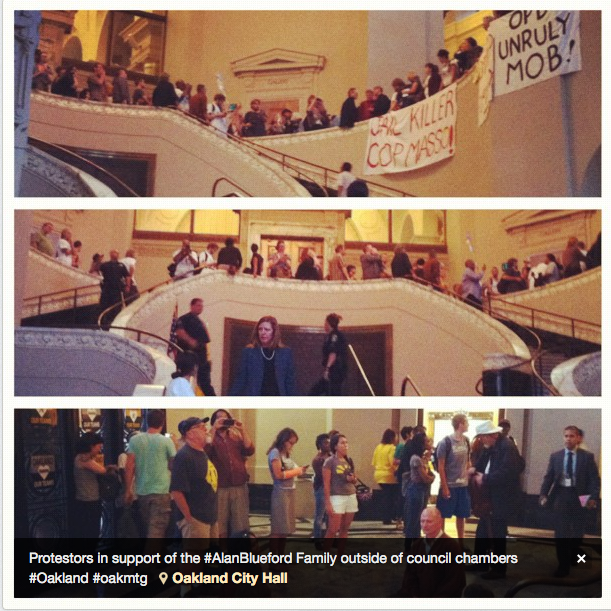 1. Deanna Santana has implemented rules restricting access to City Council meetings, by getting rid of some of the seats and forcing remaining participants to go to overflow rooms. Read rules here:

What is your response to restricting access, how Council is currently handling meetings and would you do things differently if elected in November?

2. The Alan Blueford family has had many complaints about the investigation of the shooting of their son. Their main issue is lack of access to information about the case and promises made to them in regards to getting help from the City Council.

What is your response to how city council is handling this situation? Would you do something different? (You don’t have to comment on the Alan Blueford case, but to any situation where a family seeks the City Council’s assistance in regards to the police and access to information?)

3. A hired outside police monitor Robert Warshaw, has recently made public findings from a new report on the Oakland police department. This report concerns OPD’s legal mandate to make changes in their department as part of a lawsuit judgement.

What is your response to this report? Does this change/affirm your opinion on Federal receivership of Oakland Police Department?

I received an additional question from Nwamaka Agbo with The Ella Baker Center for Human Rights via email:

4. Despite police and fire consuming 67% of the general fund, public safety is a huge issue in Oakland. What’s your vision for and approach to funding a holistic, comprehensive public safety plan? How would this be reflected in general fund allocations?

Please answer these questions in the comment section below. State your name (and if you are a staffer not the candidate please indicate that), office/district and your answer.

Comments made on this blog post does not equal an endorsement..