A conversation with Latonda Simmons…

Our favorite person in #oakmtg.

If you are a follower of Oakland City Council meetings on twitter, then you should know that we are big fans of the City Clerk, Latonda Simmons. She facilitates the full city council meetings with professionalism and a dash of good 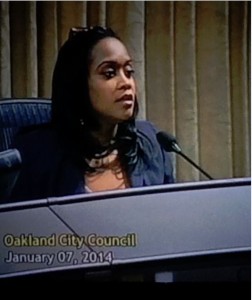 humor that #oakmtg followers have come to appreciate.

Over holiday break, I got a chance to talk with Ms. Simmons over the phone and asked her some questions about Municipal Clerk responsibilities, got some clarification regarding sharing information with the public and learned about exciting plans coming up this year.

*Keep in mind that  the answers to the questions are not verbatim, but a summary description of her answers.*

What does the city clerk do?

You might think that the only thing Oakland City Clerks do is read the names of public speakers and politely cut off a monologue on the importance of dog parks–but no, they are so much more!

Municipal clerks are a neutral element of the local government. Some City Clerks are elected and some are appointed. Ms. Simmons’ office facilitates the key work and administration of the city council by handling the noticing of  council and committee meetings, capturing the official record coming out of those meetings, and maintaining  agenda reports, ordinances, resolutions and action items. They also conduct and coordinate the city elections and other city matters. Finally they analyze all city-wide record collecting processes and establish programs and protocols. Ms. Simmons’ office just wrote a proposal to update how records are maintained throughout the city. The first such program update since 1991, after Loma Prieta Earthquake.

Finally, the clerk’s office also does the official filing to federal and state Fair and Political Practices Commission, forms that indicate personal or economic interest in various government appointments or practices. For example, those that are city staff with authority over the use of City resources, candidates, and those elected or appointed to the council or a commission, who might make decisions that could affect their own finances, must  file a statement of economic interest or Form 700. The clerk’s office and the Oakland Public Ethics Commission is currently working on how  the information can be obtained electronically.

Essentially, the clerk’s office sends out notices of meetings, collects information, and then makes it available to the public so they can see it. The Oakland Clerk’s office has 9 staff members, and they notice (or publicize) on average 191 meetings a year and sit in around 170. They process as many as to 5 -15 legislative matters per committee meeting. You might sometimes have an agenda of about 75 legislative actions at Council. Oakland usually passes about 1200 matters each year. Ms. Simmons says that there are cities of comparable sizes that don’t put out the amount of information that Oakland does.

How does one become a city clerk?

Ms. Simmons actually worked her way up from being a city analyst. However, if you want to make this your career you can start by getting a degree in public administration with an emphasis on management. Organizational development is particularly important. So if you have experience working with organizations helping to make change within the city at the local level, this might be for you! Being able to understand how the city works systematically is valuable experience in this field.

While technically you aren’t the City Attorney, it would also be beneficial to have some knowledge of the law because basic duties within the office require you to read a lot of codes and procedures. The City Attorney is the Parliamentarian, but as the holder of the public record, which is what the Clerk’s office does, you get to see the codes and the rules put into practice.

She went to City Camp! Increasing public participation is key.

As some of the hard core participants in local government are aware, there is a focus on transparency that is emerging out of the city.  Ms. Simmons says that although many assume our government is like any other we are unique in that our municipal code and charter helps to regulate actions.  Oakland has done a lot of things with the intent to increase public participation, however, at OpenOakland’s 2013 CityCamp she learned that residents are looking for more meaningful engagement.

She told me that there is a lot happening to increase public participation. The Clerk’s office is working on some exciting things (see items in bold below). The Public Ethics Commission (PEC) is stepping up their efforts. Just recently the PEC released a Transparency Report, that outlines the work the city has done within the past couple of years towards making information easy to find.  The City Attorney has an open government coordinator that is part of their office, too!

The City Council and the Clerk’s Office follow specific rules and guidelines regarding how to conduct meetings and record outcomes and sharing the information with the public. The City Council Rules and Procedures  and the Sunshine Act  specifically outline council behavior, meeting conduct, and some transparency standards. They also highlight what should be placed on the agenda and how the information is to be shared. For example, page 9 of the Sunshine Ordinance stipulates that the city must give 10 days “notice” regarding the meetings and file a copy of the agenda with the city clerk and the public library, and on-line within 10 days of the meeting.

City Council agenda items are scheduled during the Rules Committee meeting, held every Thursday morning at 10:45. The Rules committee takes up council issues and either delegate the items to specific committees such as Public Safety, or Planning or to the general council. The special committees more or less refer the items to the general council to decide upon after getting specific information and hearing testimony or comments from staff or residents involved.

After hearing from participants at CityCamp, Ms. Simmons say she is developing another tool to increase public participation,  a legislative work flow chart, or a visual timeline of how legislation or how policy starts in Oakland. How do things show up in rules? How are agenda items scheduled? Hopefully this new flow chart will better help the public understand how policy is handled in Oakland. For now, Rules Committee is the first opportunity for the public to see how legislation works its way through City Council.

What about people who can’t attend Rules? What’s up with certain subjects being placed last on the agenda?

Believe it or not, Oakland City Council meetings can get quite lively and many people come out to speak for or against issues that they feel passionately about. Sometimes, however being able to speak on an issue can be difficult for residents, especially if they have jobs or families that conflicts with the meeting schedule. Sometimes their item might not come until last on a very full agenda, and the meeting could last as late as 12 midnight. On a SCHOOL night!

However, Ms. Simmons says that the Rules Committee is where the public can participate in how the agenda items are scheduled. The Rules and Legislation committee assigns proposed resolutions and ordinances to the council among other things (for more info. pgs. 14-16 of Council Rules and Procedures). By attending the Rules Committee meeting you can find out what is happening to a particular item and how it is scheduled. If you know that a meeting agenda item is scheduled really late, but want to make sure full public participation is allowed, you can appeal to the city council to have it moved. Under “Modifications to the Agenda” (pg. 8) a council member has the right to adjust the agenda as long as Non-Consent (or items that don’t have a majority consensus and might be controversial) are not placed earlier than 6:30 pm.

Ms. Simmons also understood that being able to make the Rules Committee meeting can be difficult. Special committee meetings don’t have to be held in the afternoon or evening in order to accommodate the public. So, unfortunately it might be difficult to have it moved. This is why the clerk’s office made an effort to have the meeting recorded and streamed on KTOP. You can watch the meeting live stream or on video by clicking here: http://www2.oaklandnet.com/Government/o/CityCouncil/s/VideoArchive/index.htm

In addition, the clerk’s office is working on an exciting project to further increase public participation. Ms. Simmons is working on an update to the agenda where people can plug in comments at agenda items, and have them be ‘on record’ so that the Council can see how the public feels about each topic. “This is a chance to do some broader and smarter kinds of public participation” says Ms. Simmons. She would also like to make streaming of meetings available on all mobile devices too!

What’s up with document titles?

One of the complaints of #oakmtg is the transparency of finding information online. Some of the documents attached to city council agendas or minutes are named ambiguously and are difficult to understand what the documents contain. This is also a personal pet peeve of mine.  As someone who doesn’t have a lot of time to be perusing through Legistar, it isn’t convenient to download documents, open it and read that it has nothing to do with what you are looking for. Having a proper title can make the process easier and less cumbersome.

However, according to Ms. Simmons, the Supplemental title on documents means something internally. It is a qualified term as relates to the agenda process. Supplemental information submitted according to the date it was received by the clerk’s office. I asked about naming the document so that individuals can see what they are without having to download it first. She understood and actually could agree how their internal process could be confusing to folks outside of her office. City Camp helped her to be clear that even those things that her office does very well technically, may not be clear to the public. Ms. Simmons recognized that adjusting how they name public documents might be  something that they can do: a mix of conforming to the Sunshine ordinance, yet making it clear and accessible to the public.

What’s your favorite part of doing your job?

Public participation  is her favorite part. “Even when it isn’t all flowery and happy. It’s the public’s government and it’s their right to voice their opinion”. She says even when the public is there to offer criticism, being able to witness the public exercise their rights, is awesome.

She also likes the strategy component of her job and being able to find opportunities to make things work well. Her job is to look at all the rules and procedures, explore all the different possibilities and find the practical ways to get things done.

Ms. Simmons was pleasantly surprised and honored that #oakmtg thinks highly of her. She really appreciates that the office is seen as presenting themselves well and doing great work.

However she holds her staff in high esteem. “They are awesome people and very dedicated to their work.” She says that during municipal clerk week (this year it’s May 4-10th) when honored by city council, she makes a point to let everyone know that there is no way she can do her job, without her staff.

What do you like about our city clerk? Do you have any comments, thoughts or ideas regarding city council meetings? Share! (she might actually be reading)

10 responses to “A conversation with Latonda Simmons…”