If you are a frequent reader of my blog (or have spoken to me for a couple of minutes) you would know that my goal is to see more of my peers, young minorities, participate in local politics or have a more active interest in making Oakland a better place.

But don’t think that there isn’t anything like that going on, already. Au contraire! ..There are a lot of individuals and organizations doing awesome things for our great city, state and country.

Here are some examples that have occurred over the past week and an event that is happening pretty soon that you might want to participate in.

A guy I follow on twitter often tweets: “get active,” presumably to encourage his followers to be more involved in their community. Pendarvis Harshaw (@ogpenn) practices what he preaches. A recent Howard graduate, this Oakland writer and educator teaches teens about political activism and you can find articles of his about local Oakland happenings at OaklandLocal.com. I am greatly inspired by him and look forward to watching him grow into a future Oakland leader. (Not that he isn’t doing a good job already.)

Check out this video by New America Media featuring Mr. Harshaw and young people in Oakland participating in workshops at the Oakland Art Museum

Status of Young Men of Color

Harshaw was training young people to testify at a Congressional Committee hearing held in Oakland last Friday on The Status of Young Men of Color. Growing up as a young minority male is not easy, especially not in Oakland or the state of California. Our young men are tempted by drugs, violence and crime as an alternative to contributing to a community that doesn’t seem care enough to give them a quality education or provide jobs.

“This is a rescue mission,” said Assemblyman Sandre Swanson, D-Alameda, who worked for more than a year-and-a-half to help create the committee and now serves as its chairman. “We were walking by this problem and not paying attention to it. We took it for granted that it had to be that way, and it didn’t.”

The committee heard ideas such as creating safer environments to walk to school, access to quality health care and increasing job opportunities for youth. This hearing is the first of many to be held in cities across California, like Los Angeles and Fresno. The hearings are supposed to help provide ideas for future policy to help improve the status of young men of color. However, with the current CA budget crisis, it seems like funding for education and other social programs are the first to be cut. Will having hearings like these make a difference if we don’t have a budget, governor or state legislature to support proposed policies?….

…It’s possible to fix many of the problems facing minorities, if we place people in elected positions that care about these issues and will fight when important programs are threatened. Orgs like the California Young Democrats – Black Caucus is trying to do just that!

Together Tour”. At The Press Club in San Francisco last week, local minority elected officials and supporters gathered to celebrate accomplishments for the year, support Bay Area candidates and to fundraise in support of a new chapter: The East Bay Black Young Democrats, to be headed by Mark Williams, a 25 – year old African American AC Transit Director.

Part of the EBBYD Mission is to (among other things) “Contribute to the growth and influence of young Black/African American people by educating and registering voters, developing leadership, contributing to the development of the EBBYD platform and in other ways as supported by the EBBYD membership.”

The California Young Democrats-Black Caucus want to reach 10, 000 young black democrats (14-36) across the state of California to support 15 black candidates who are seeking election in 2012. As of last week, they were only $200 short of their fundraising goal. For more information about how to contribute or to how to join EBBYD contact:

I donated a little and got this nifty pin! 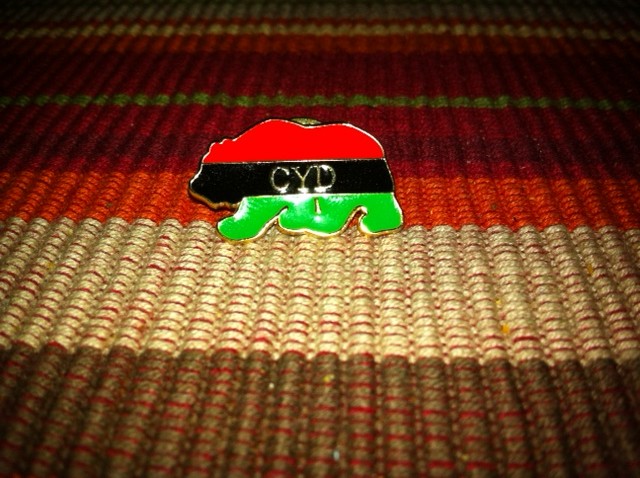 Okay, President Obama isn’t from the Bay, however there are plenty of Bay Area residents who want to see him re-elected.

Why should we watch the State of the Union? Some say this is the first official ‘kick-off’ to the general election. Obama is expected to outline his plans for the year (including getting more jobs) in the hopes of convincing us why it is so important to keep him office.

Why should we watch it at Everett and Jones? ‘Cause it’s Everett and Jones!! Also OFA will outline their plans for the campaign this year. If you are interested in helping in that effort, you should come and get more information.

I’m a Democrat for the most part. So, I tend to talk about democratic things.

However you don’t have to be Democrat to be active in the community or in political elections. There are “the others”.. The Republicans. The Green Party, the Independents and ..and even the anti-political groups like Occupy Oakland.

Whatever your preference, I urge you to participate ..instead of just letting things happen. Change comes through active participation from everyone. Not just the President, Governor, Mayor or City Council.

We all need to be active.

So good people..what are you doing to ‘be active?’ What organizations do you feel need to be highlighted? Are you going to watch the State of the Union? What would you like President Obama to say?