My Rant: #OPD needs to do better.

Howard Jordan and the Police Department may be trying..but they are losing the PR game.

I like to think of myself as an open-minded person. Every person and/0r entity deserves a chance to redeem themselves, even if I harbor a healthy dose of internal skepticism.

This was essentially my attitude towards the Oakland Police Department. Wednesday, OPD tested even my generous patience.

(You might say..really? As a black woman you should question everything the police does. I will get to that later..).

Earlier this month OPD tried to establish a positive relationship with Oakland by hosting an Open House on May 4th. I not only attended, I was a little excited! My activist friends openly laughed at me, questioned my sanity and probably wondered about my motives behind my back.

I didn’t care. I had attended various town hall meetings featuring the police and the Mayor’s

office in regards to public safety and the 100 Block program.  OPD is short of staff, yet committed towards reducing crime.  Along with the  Mayor’s office, they have implemented new technology, pulling resources and  coordinating with city agencies (like Parks and Rec) in an effort to help keep the city safe. I want them to be successful. I want Oakland to thrive and not be plagued by a reputation for being a dangerous city. (OPD gave me props on my twitter coverage of one of the meetings..which freaked me out a little).

So, I went to the Open House. I figured this was the closest (hopefully) I would ever to get to a jail cell and I was curious.  I actually had a good time. I got to tour the facilities, a cop car,  and witness a cop standing up on his motorcycle while it was moving. The Chief admired my “I Hella Heart Oakland” t-shirt. Good times and feelings was shared by all who attended.

When things go down hill for me..

1.  Then Alan Blueford was shot and killed during the early hours of May 6th. ( The very next night! #smh). I had not paid close attention to the case until I read the statement from the family expressing anger over what they were told about their son’s death. Then I attended the city council meeting, May 15th where the family expressed further outrage over how they were treated at the police station while waiting for information on what happened to their son.

This affected me emotionally.  The mom works in a hospital, the cousins are graduates of college, one a lawyer another with a Master’s degree in social services. They are home owners, tax payers, supporters of the police and the City Council. Yet, they were treated horribly by the police, having to wait several hours before anyone would talk to them about what happened to their son.

That hurt me. As a law abiding Oakland resident, a black woman and human being.

In response the city council declared they wanted an investigation into how the police treats families of shooting victims and, Chief Jordan met with the family and apologized,  which according to everyone is unprecedented. In my opinion, it’s the very least he could have done. That should never have happened. 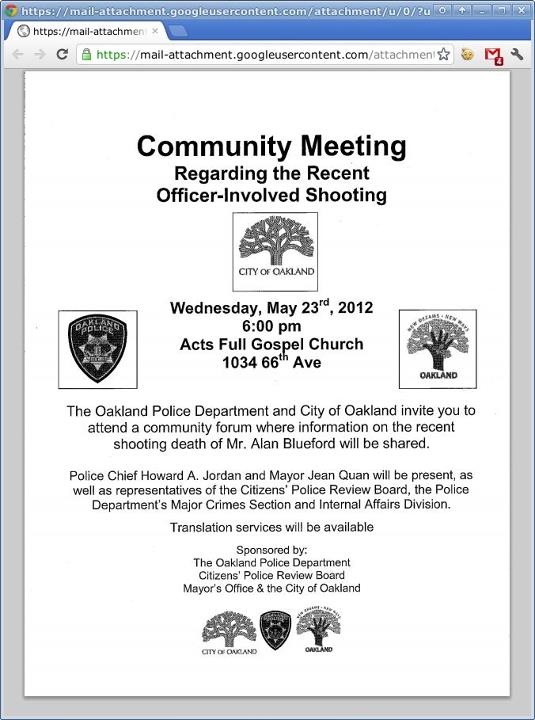 Sensing that public wasn’t too happy with them, the Police Department and the Mayor decided to have a meeting in East Oakland to explain how the investigation into Alan Blueford would progress at Acts Full Gospel Church. I made every effort to attend expecting a nuanced discussion on the case, a chance to get answers and a show of good faith by the Mayor and the police department.

What took place instead? An unnecessary waste of time that ended up pissing people off. The police trotted out various officers to explain the process of the investigation. I missed the first 10 minutes coming from work in Concord, but was able to catch a representative from Internal Affairs explain the chain of command in the investigation: (in case you can’t read the handy chart pictured below) first the Sergeant makes a report, then the Lieutenant reviews the report (it goes back and forth between them until it’s approved) then the Captain reviews it, Assistant Deputy, then Chief..then God knows who else.

I know..who cares right? We want to know what’s going on with the Alan Blueford case. AND WHY WOULD YOU COME TO A MEETING WITH A DRAWING? Really? Every meeting I have been to with the police they came prepared with fancy power point slides, facts, figures, technology.. the whole she-bang. What happened here?

After hearing from a representative of the Community Police Review Board explain who they are ( a group of independent citizens appointed by City Council and sworn in by the Mayor that conducts independent investigations) and tell us that their hands are essentially tied until the police shares information with them from their report.. we are finally able to ask questions….

Chief Jordan took questions from people who wrote them down on cards. The answers were ones we have heard before:

As he continued to give rote answers, the audience became more agitated and started asking questions that weren’t on cards: Why is it that black men are getting shot in the back? Is the officer hiding in Las Vegas like Mesherle was? Why aren’t we able to ask our own questions?

The Chief did make a brief complaint that folks in audience weren’t being respectful by yelling out questions. He said folks came to get answers and they weren’t getting any because some were being disrespectful. He answers a few more questions (which I already reported on). And then concluded the meeting… at 6:30 pm!!!

Local Hip Hop icon Davey D wrote a blog post and recorded an awesome video of the red hot mess that was the community meeting. It also talks about the arrest of an Occupy Oakland Member shortly after for an alleged assault after the meeting.  Please read it.

Yes, it was a red hot mess. It was disrespectful in the extreme and if I was the Pastor of that church I would be MAD. Acts Full Gospel is a highly respected church with a large and vibrant membership within the Oakland Community. For OPD to come in and pretend to be reaching out to the community, come with drawings and end the meeting within 30 minutes..is a slap in the face.

What took me so long??

I’ve only lived in the Bay Area 17 years..and in Oakland for 14 of those years. During this time I focused on cultivating a good life for myself.  I went to school, found a decent job,  a church home, made great friends, I voted, paid taxes, volunteered in the community for various causes… I basically just, lived. I don’t have a lot of experience with crime. My mother  also raised me to have a healthy respect for authority ( I even find men in uniform attractive. Firefighters…mmmm….). Interactions with the police is not something I am accustomed to.

I am not a trouble maker. I am not confrontational. I hate it when people rudely yell, curse or interrupt a peaceful meeting. I don’t think provoking police is a good idea. I’m a liberal..but moderately so. (I probably wouldn’t even call myself progressive). I wouldn’t classify myself as an Angry Black Woman.  I’m about Peace, Love and Hair Grease.

I also recognize that there are criminals in the world and that they deserve to go to jail..and yeah some of them are black.

However, when I witness something that is unfair or wrong I will take notice..and everything about this case and how the police are treating minority citizens in Oakland in general stinks.

Yes, Occupy Oakland has seemingly become pointless, with no organization and/or goals..but the noise and ruckus they are making about what is going on with the police department and city government in general is not WRONG. Yes..Black People can be loud and angry..but given the behavior of the people that we pay to protect us and keep our community safe we have every right to be!

“We fear for our lives. We fear the police because they don’t have no consideration for people, for humanity,” Raymond Arnold said. “Autopsy reveals ODP shot Jones in the front” ABC News, Nov. 2010

OPD has a long history of abuses towards the community. But lets look recently, like the past 10 years. Alan Blueford is not the only questionable officer involved shooting of black men in Oakland.. “jpmassar” of the Daily Kos lists other deaths and lawsuits that Oakland is facing as a result:

I don’t want to argue the merits of each case (including Alan Blueford’s) or who was ultimately right and/or wrong. But this list is too long for it to be a coincidence..and it’s costing our city too much money to settle. Money we do not have.

Chief Jordan: you  need to take a hard look at how the police is interacting with the community and make changes. Especially if you are looking for city residents to pay more money in taxes for more police. Especially if you are trying to make sure the Oakland department doesn’t come under federal receivership.

Chief Jordan, if you want to reach out the community and be sincere..be real. Don’t half step it. Answer questions that may be uncomfortable. Listen to people when they are talking to you. Stop prevaricating, reading speeches, giving rote answers, hiding behind ‘the law’ and  just tell the truth. Negotiate and compromise.  Stop waiting for bad things to happen and then responding. Be preemptive.  I understand that you need to protect your sworn brother’s but you are paid to protect the residents of Oakland. Make rules and enforce them. Hold your officer’s accountable for their behavior. End the corruption. Face what you and your department are doing wrong and make every effort to change it.

It may seem unfair, given that you haven’t been Chief for very long. Folks are loud and rude and confrontational. But you just are going to have to take one for team. You are the leader and you represent your organization. People are understandably upset, but if you want them to believe you are sincere and care, you have take them seriously and respect their feelings. It’s your job.

This just doesn’t go for the Chief. The Mayor, City Manager, Community Police Review Board, City Council, anyone who works for the city, represents the city and says they want to see OAKLAND be better..they need to actually BE better.

6 responses to “My Rant: #OPD needs to do better.”