My response to Kernighan email.

Here is a link to the letter that one of my twitter friends posted:

Here is the text of the letter:

The need to address Oakland’s epidemic of crime and violence has never been more urgent.  I am sure you already know that and you are looking to Oakland’s leaders to take action.  This Tuesday night, both you and I have a unique opportunity to take action in a meaningful way.   My part as a City Councilmember is to vote YES on four matters, each of which will help the Police Department become more effective in reducing crime.  (Details on those items below.)

It is extremely important that the City Council vote to support these measures for two reasons. Foremost is the practical impact these measures will have in helping to reduce the crime that is plaguing our city.  The second reason is to send the message that our city will not be bullied by the group of people who have attended several Council meetings to heckle, boo, or shout down any Councilmember or citizen who disagrees with their point of view.

I am writing to ask you to do something out of the ordinary to help me and several other Councilmembers turn the tables on those who would disrupt the meetings and intimidate other members of the public from speaking.  At this Tuesday’s meeting, we want to FILL the Council Chambers with people who believe in orderly and civil discussions of issues, who respect the right of free speech for all people, and who support the right of everyone to participate in the democratic process.  We are calling upon you, the people we represent, to come in large numbers to this City Council meeting and fill the seats and set the tone.  You don’t need to speak unless you feel comfortable doing so.  I am just asking that you show up, take a seat, and respect the right of others to speak their minds.

Now I know that many of you will say:  “I’m not going to that circus and subject myself to the abuse I’ve read about!”  To that I say two things:  First, as chair of the meeting, I will insist on decorum, and if there is heckling, I will ask the police officers to escort those people out of the chamber.  But also key is our strategy to out-number the disrupters. In fact, if most of the seats have been taken by ordinary folks who value an orderly and peaceful process, there will not be enough room for a large presence of the hecklers.

We are going all out to organize a strong presence of reasonable people at this one meeting. Expect to see fellow residents from West and East Oakland, Montclair and Chinatown. Please be part of this! Think of what a powerful message it will send.  Sane Oaklanders reclaim their City government.

If you can attend:

–Location of City Hall is 14th Street between Broadway and Clay.

–Free Parking during the meeting in the parking garage next to City Hall.

–Drive into the garage on Clay Street, just north of 14th Street

–The walk between the garage and the door to City Hall is less than 100 feet, so you will be safe coming and going.

(Walk out of the garage on the north side of the building, for shortest walk.

Please let me know by email if you will come to the Council meeting. (Please email me directly, don’t reply to the yahoo group.)

With a strong presence of like-minded people, I think you will find this to be an uplifting experience.

Please, bring a friend and take back our city on Tuesday night!

At first I made a rant on twitter. Then some of my followers asked me how I felt about the heckling at city council meetings and I promptly let them know that I actually don’t agree that heckling is an effective way to sway council members.

However, I do not think that Kernighan’s email was any better. I wrote an email to my neighborhood yahoo group in response and I am publishing it now to show my twitter followers that I wouldn’t just lecture them, and let the CM’s get away with their behavior.

Here is a screen shot of my email as proof that it was sent: 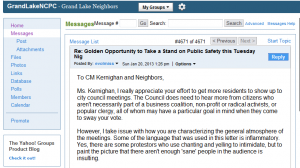 Here is the text of my letter..

To CM Kernighan and Neighbors,
Ms. Kernighan, I really appreciate your effort to get more residents to show up to city council meetings. The Council does need to hear more from citizens who aren’t necessarily part of a business coalition, non-profit or radical activists, or popular clergy, all of whom may have a particular goal in mind when they come to sway your vote.
However, I take issue with how you are characterizing the general atmosphere of the meetings. Some of the language that was used in this letter is inflammatory. Yes, there are some protestors who use chanting and yelling to intimidate, but to paint the picture that there aren’t enough ‘sane’ people in the audience is insulting.
I attend these meetings, most of the time I am tweeting or updating my peers on Facebook. I don’t agree with what some protestors are doing lately and I call them on it.
But to be fair, the protestors are just trying to get the Council’s attention when other methods have not been successful. Yes, they are often disrespectful to those who are speaking and we need to find ways to stop that from happening. However, this email has a ‘tit for tat’ tone, that in my opinion, is not becoming to your office.
Maybe in the future we can offer advocacy training and share with those who want to participate in the meetings how to effectively and respectfully engage in civic discourse. I would be happy to help in planning and organizing that if you are interested.
In the meantime, I urge the neighbors to come to the meeting and share your thoughts as well. The decisions made by the council effect us all, and we need to make sure that all voices are heard.
Thanks,
Tonya D. Love
Harrison/Oakland Ave Resident

Now, I don’t plan on making a habit of copying letters sent to constituents via email or embarassing council members on the regular. However, this email was made public by someone else, and this council member felt no compunction about embarassing citizens that come to the city council meetings.

Also, I wanted to publish Kernighan’s full letter because she includes some good information about going to council meetings that I think everyone should be privvy to.

In general, civil disobedience should be a tactic used sparingly, otherwise you are just going to upset and annoy your audience. And it’s disrespectful to those who take their time to come and speak at public meetings.

On the otherhand, the protestors get upset to see Council members not paying attention to speeches. You can literally see some CM’s checking their phones, boredom on their faces and sometimes their responses are just as childish as some of the protestors. They should be kept at a higher standard because they are supposed to be professionals. That’s why we elected them to office.