A new understanding of violence and nonviolence as a tactic.

“Nonviolence is not a sign of weakness, but rather one of self-confidence and courage” – Dalai Lama tweet.

There is a debate being carried out in the #Oakland internets. Deep and contentious conversations are taking place on Oakland blogs, Facebook posts and Twitter threads about the violence that has become associated with the Occupy Oakland movement. Many advocates have withdrew their support of Occupy Oakland because they can not condone the senseless and seemingly random acts of violence (trashing landmarks, retaliating against police) and damage to our beloved city. Others feel that these acts attract the attention that is needed towards the real issues: political and socioeconomic disparities, police brutality, and local government corruption.

I think there is  confusion regarding the terms and the tactics and I think the media plays a big role in shaping our perception of what violence is and what role it plays in a movement.

Let me rephrase that. I was confused about the terms and tactics .. The media does play a big role in shaping perception of what violence is and what role it plays in a movement..but advocates can also play a role.

In a previous post, I stated that “violence isn’t graffiti or vandalizing, but violence is murder and robberies”. I had directed that statement towards the Oakland police, because I was frustrated over their focus on Occupy Oakland rather than the increase in shootings and robberies happening in Oakland recently.  Although, I still think the police need to evaluate the placement of their resources..my definition of violence (and nonviolence) has changed.

Webster’s 1st Definition of Violence is an..”exertion of physical force so as to injure or abuse”. I previously took this to mean directing physical force or harm onto a person..but violence can include destruction of property and low level throwing bottles and stuff at police.

How does destruction of property injure Oakland? It’s demoralizing. There are buildings and landmarks within the city that has great meaning.  For example Frank Owaga, a former city council member, was also civil rights leader and (along with his family) a former Japanese detainee during the Civil War. Destruction of  City Hall and it’s plaza is an insult to his memory and all the hard work that residents and officials put into making it into a highlight of the city of Oakland. This not only hurts ‘the man’ but it hurts the residents of Oakland and all who care about the city and have pride in it. Residents that include the 99%.

How does this kind of violence compare in the face of the brutality the police uses against Occupy Oakland when occupy engages in peaceful protest? It doesn’t. The use of tear gas and batons against a protestor is inexcusable. But this is where nonviolence comes in..

Websters definition of nonviolence:..” abstention from violence as a matter of principle; also : the principle of such abstention “.

When engaging in a peaceful protest..and the police react to you by spraying tear gas and rubber bullets, try this as a tactic: do nothing. Abstain from responding in kind.  Protect yourself..cover your face, move away..but don’t throw rocks or bottles back at them. Do not go to another part of the city and cause further destruction.

The media is the media and they are going to do what they do. However, the Occupy Movement can play a role in what the headlines are going to be.  The headlines should be “400 arrested in peaceful protest” and not “Occupy destroys City Hall”.

The police should not be able to say: “they threw rocks at us!!” when confronted by the media and the public.  The  general public (the 99%) should be able to point at the police and say “all they were doing was protesting!! Why are you using our tax dollars to focus on peaceful protesting instead of the MURDER happening around the corner?”

Where did I learn this from?

Abstaining from violence is just part of what I learned in using nonviolence as a tactic during a two-day “Nonviolence and Conflict Reconciliation Orientation” developed from the teachings of Martin Luther King Jr taught by Jonathon Lewis and Oakland’s own Kazu Haga from the Positive Peace Warrior Network. During this two-day workshop that included readings, videos and group activities, I learned about the principles of nonviolence and how MLK and the Southern Christian Leadership Conference used it as a successful tactic during the Civil Rights movement. During this weekends orientation not only did I gain a deeper understanding of MLK and his teachings, but I learned how nonviolence plays a positive role in putting an issue to the forefront.

I was blessed by this orientation and learned so much about advocacy and conflict resolution. This was a free workshop, but I donated not only my time and energy but a little bit of cash towards this effort, because I feel it so needed during this pivotal year of advocacy in Oakland. I feel very proud to have earned my certificate! 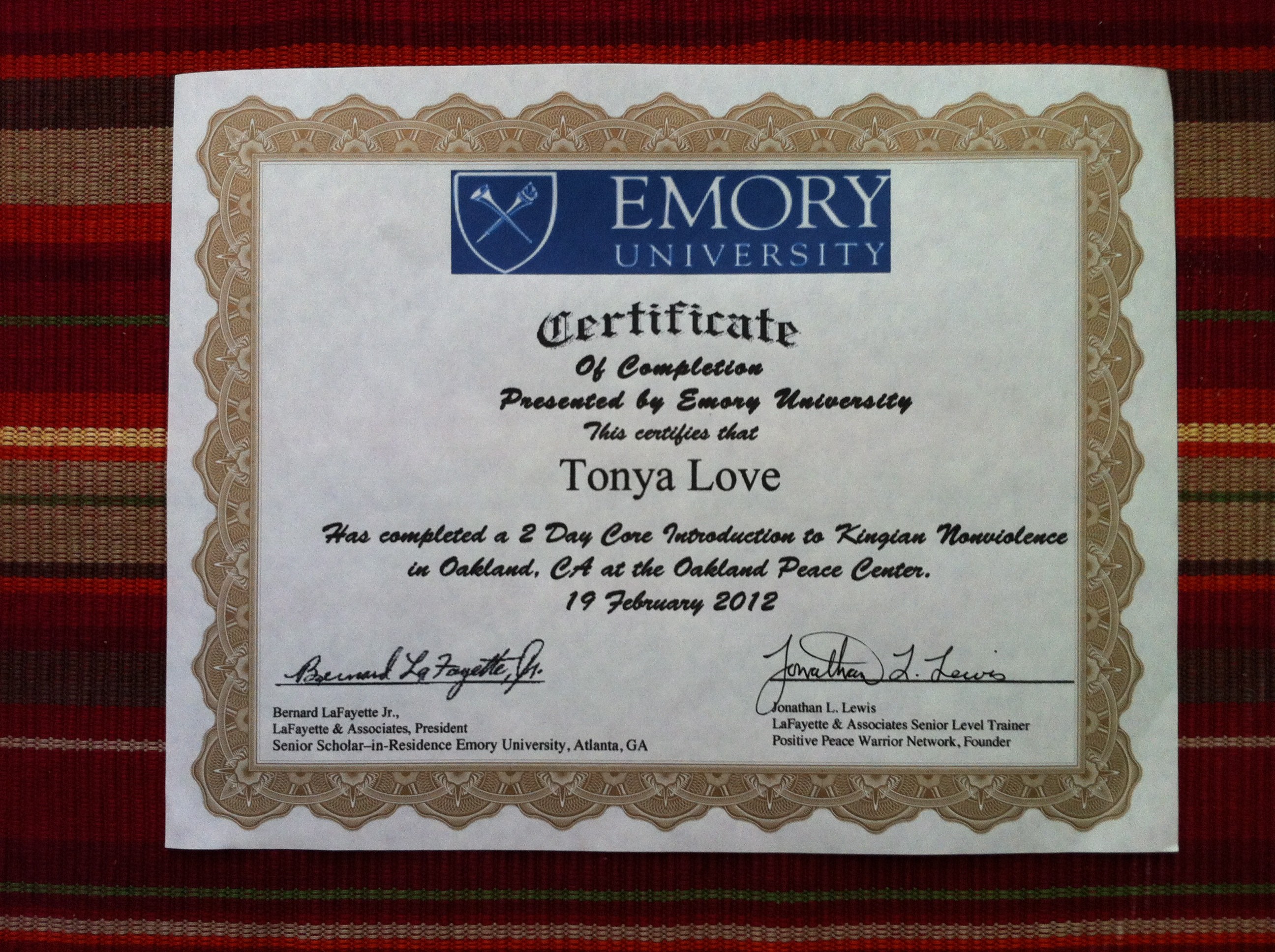 To learn more about the Positive Peace Warrior Network and the workshop.. read their blog! Click HERE Go to a training and support their efforts! 🙂

3 responses to “A new understanding of violence and nonviolence as a tactic.”