Learning from “The Interrupters” of Violence in Oakland

It’s the end of the second week of February in Oakland, and last week there were seven homicides. You 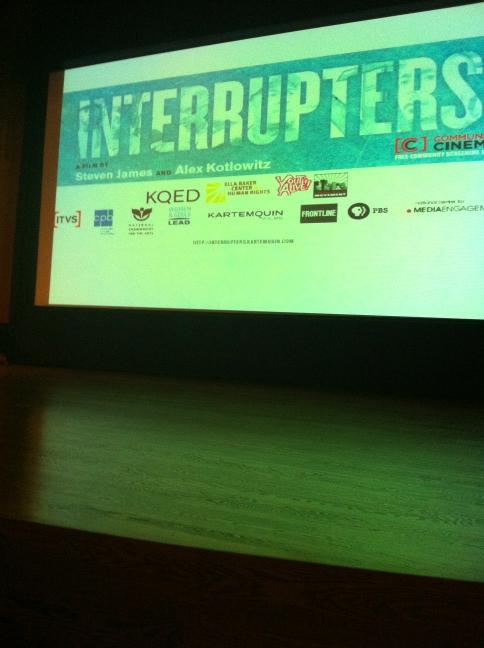 wonder if there is anything that can be done.

I was blessed to be able to watch a screening of “The Interrupters” on Thursday night (Feb. 9th) at the Oakland Museum of California.

[ I say blessed because if it wasn’t for my friend Tiffany, who has the gift of being able to talk her way into anything (even bringing a Burger King hamburger, fries and drink to the Bill Graham auditorium in SF), we would not have been able to get seats..and in the front row!]

“The Interrupters” (@TheInterrupters) is a documentary by Steve James and Alex Kotlowitz that follows the work of an organization called CeaseFire (@CeaseFire_IL) and it’s efforts to fight violence on the streets of Chicago. CeaseFire outreach workers, many of whom have had a past history of violent crimes, connect with youth to try to prevent violence through counseling and just plain ‘real talk’.

Thursday night’s preview was sponsored by Oakland’s Ella Baker Center, KQED, the Oakland Museum of California, Youth Alive! and a many other organizations.

After the movie screening there was a panel moderated by Abel Habtegeorgis of Ella Baker Center that included Eddie Bocanegra and Ameena Matthews, two of the outreach workers from CeaseFire and featured in the movie.. as well as Kendra Simmons from Youth Alive! and Anthony Del Toro from California Youth Outreach who work in violence prevention in Oakland.

I was able to record a bit of the panel conversation below..

Ameena Matthews from CeaseFire speaks on the similarities between Oakland and Chicago and why it’s important to share our history with youth today. (9. 03 min)

Eddie Bocanegra from Cease Fire talks about the consequences for him after he shot a young man while he was young and what motivates him to be an ‘Interrupter’ (7.42 min )

Youth Alive! is an organization that believes that violence is preventable, and advocates for policies that reduce gun, gang, family and rape violence. Kendra Simmons talks about her approach to counseling youth that are hospitalized as a result of violence in Oakland. (1.27 min)

California Youth Outreach helps youth involved in gangs via education, intervention programs and offering various opportunities towards future success. Anthony Del Toro talks about how to gain the trust of youth who are engaged in violence. (1.48 min)

And probably many others who I might have missed..

But let’s not forget one of our hosts The Ella Baker Center for Human Rights.. a grassroots organization whose mission is to give Oakland residents skills to work together to strengthen our community. One of their campaigns, Heal the Streets, trains youth to become community leaders and violence prevention advocates.

The resulting conversation was honest and eye-opening. One teen asked panel members how can she uplift a brother who had just been sentenced to life in prison for murder. Another young lady, whose father was shot in the head and cousin recently murdered, applauded the panelists for their efforts which inspired her. (After the conversation she immediately went to a representative from Kids First and asked to volunteer.)

At end of the discussion a young man, who took it upon himself to start a grassroots organization called “The Eagles Program” (sorry couldn’t find a link) where teens learn dance and acrobatics to keep them off the streets, expressed frustration about going to all of these talks/meetings on violence and nothing seems to come of it. The violence in Oakland still persists.

In response Ameena Matthews stated ..”The end result starts and ends with self”

Don’t worry about what the myriad of organizations are or are not doing. Or how our elected officials seem more concerned about getting re-elected and protecting their own instead of protecting those most in need.

Look at your actions and figure out what you can do to stop violence in your community based off of your own personal strengths.

I agree 100% and that goes for everyone.

Here is a couple of small things that you can do that can push us towards progress.

1. Some of these organizations need donations to support their work. Donate some money..but also donate your time.

“The Interrupters” will air on PBS’s Frontline on Feb. 14th (click for trailer). Check your local listings (I think it comes on at 10 pm Bay Area time) and watch this show.

Go a step further and invite your friends and some local youth to watch with you.

KQED Celebrates Black History with an awesome website describing local heroes and a handy dandy Black History Month Resource Guide (click to download)! Make sure to check out KQED and PBS for awesome programs coming up in February.

As my intrepid friend Tiffany would say … Smooches!

2 responses to “Learning from “The Interrupters” of Violence in Oakland”